Excellent method of piping a heat sink radiator as the radiator will self-vent any air (air in the rad will swiftly prevent it working).

Heat sink radiators are also desirable as they prevent thermostatically controlled boiler stoves “shutting down because of overheated water” (people in the room where the stove is might be cold and unhappy because the stove has shut down – all because the radiators, in other rooms, are too hot).

Note that a heat sink radiator is always on when the stove is lit and for quite a while after a fire dies and so is best in a room where this heat can be used. Bathrooms are ideal as towels can be dried. Bedrooms are not good as the radiator can be on for quite a while after the occupants go to bed (room gets too hot). Landings are good. Of course, due to pipework considerations you may not have a lot of choice (where the heat sink rad goes is often the most difficult issue I face when designing a wet system).

For a heat sink radiator to perform correctly it must be sized and plumbed in correctly. As suggested earlier the primary circuit will likely be in 28mm copper pipe. The pipe to the heat sink radiator from the primary circuit should be 22mm, although 15mm can be used in the last 30cm close to the radiator. There can be no valves of any kind on the radiator (I use brass compression fittings male 1/2″ bsp thread to 15mm compression). The plumbing is TBOE Top Bottom Opposite Ends. In other words the FLOW goes into the top whilst the RETURN goes into the opposite bottom corner.

The above picture shows pipes from the stove travelling up the right hand side of the chimney breast. The two pipes branching off close to horizontal head through a wall and into a heat sink radiator on the opposite side of the wall. For those interested the pipes travelling up into the attic are two pumped radiator pipes and one vent pipe (no cylinder on this job). 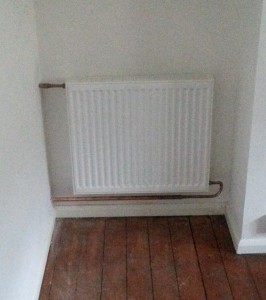 Above is the heat sink radiator on the other side of that wall. Note the 22mm pipe changing to 15mm close to the radiator. 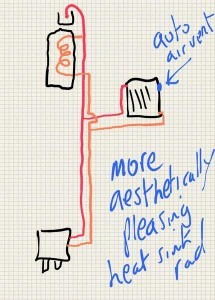 Above is a slightly more aesthetically pleasing version of the heat sink radiator but it will not self vent air. I will always fit the automatic air vent but not all plumbers do. Note that if a heat sink radiator gets air in it (they can and I will discuss this in another article) it will stop functioning as there will be no circuit of water passing through it. Instead of an auto-air-vent (top right hole on rad on above picture) one can fit a 15mm copper pipe that loops over the header tank like a hockey stick.

The picture below shows a circuit without a cylinder. One can have just a heat sink radiator as long as it is the correct size. 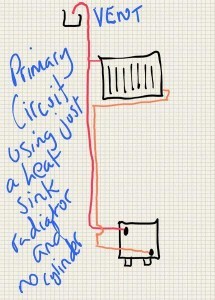 You can buy stuff here: