How do I fit a chimney flue liner to a pot or cowl?

Your chimney liner needs to be connected at the chimney pot. There are two standard methods of achieving this: 1. Hanging cowl method (if no liner insulation to be used). 2. Mortar inside chimney pot method (suited to bare liner or Vermiculite insulation or blanket wrap insulation). 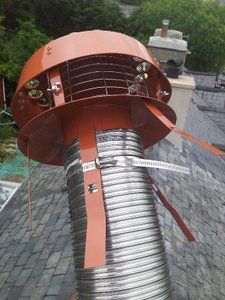 This is a very simple method with many advantages and some disadvantages. Essentially you hang your liner from the cowl, the cowl having a male tube that inserts into the female liner with a Jubilee clip clamping the female liner around the male tube. To be truthful most chimneys are narrow enough that the liner is fully supported by the chimney itself with just a little weight pressing down on the stove.

Tip: The Jubilee clips will only tighten with a screw driver with the “bolt part” flat against the liner.

The cowl pictured, is a “Hanging Cowl” type (not the model we now sell but similar). 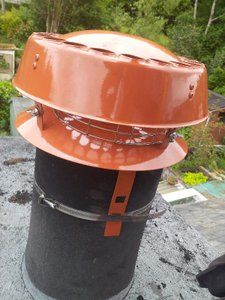 The cowl comes with two Jubilee clips (one longer than the other). One clip wraps around the three inner straps to connect the liner to the snout of the cowl. The other clip attaches the outer three straps to the pot.

OFTEN IT IS BEST TO “FIT YOUR COWL LAST JOB” (e.g. When you use a fitting where your liner is connected to your closure plate at the bottom (e.g. a sealing-plate-adaptor-combination)  and is “fixed” and cannot be moved. In this case, in order to proceed, leave a little liner sticking out of the chimney, just enough to get the supplied short Jubilee clip onto the cowl snout. Press down very firmly on the cowl so the liner compresses and the cowl touches your pot allowing you to add the longer, outer Jubilee clip around the pot itself. If the chimney is tight and the liner will not compress at all then you can a) choose not to fit the inner Jubilee clip or b) add some mortar to secure the last few inches of liner to the pot (see last paragraphs of this article).

As can be seen the liner is now connected to the cowl. I fit these cowls very often as they are swift and effective. In practice the liner is usually well-supported by the tightness and various bends in the chimney flue (unless in a larger chimney and in this case the “use roofing screws and washers instead of a clip” is generally considered the better option especially if the liner has heavy insulation). 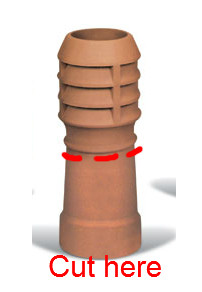 Note: As long as your liner will fit down the pot then many pots will be okay for the hanging cowl – it all comes down to aesthetics. However, anything that it is very tall or with an ornamental top can be cropped to make life easier when fitting or improve the aesthetics. I often crop pots.

To cut a pot down you need an angle grinder with a suitable 115mm cutting disc (I use general purpose diamond tipped blades).

WARNING: Chimney pots are very heavy and the part you cut off can be very heavy. The weight of the top part, when it comes away from the bottom part, can trap your cutting blade causing your angle grinder to to spasm and jump. This is not a nice operation. Only attempt this if you are using a cherry-picker or have a suitable platform or scaffolding or a suitable base on which to work. NEVER attempt this from a ladder.

Also I often have two people (me and another). I first cut a line all the way around about half way through in depth. Then we wrap the pot in a hessian type dust sheet (to stop bits falling) and then tap it gently with a lump hammer, reaching under the sheet to extract bits as they fall off. The cut line prevents any cracks passing past the line (hopefully). If it does not work one just has to fit a new pot. There is of course a risk of a big piece coming away and as a stovefitter I just have to deal with it. 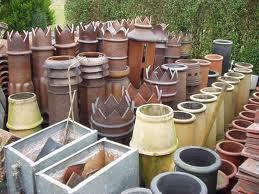 Looking at the picture on the left… one could probably fit a hanging cowl to any of the pots shown. One could also cut off the tops of many of them.

Secure the pot by flaunching with one course of bricks (ideally if there is room) and a 3:1 sand cement mix.

Add a cowl that will prevent bird and rain egress. Cowls (must be for solid fuel as some are for gas and oil).

Note: If adding Vermiculite follow the instructions as detailed below but adapt as required: obviously you will pour the Vermiculite in before the plate goes on.

Method 3: Liner and existing pot (with or without Vermiculite)

Do you need to insulate my liner? In my opinion generally not. See here: https://www.stovefittersmanual.co.uk/articles/should-i-insulate-my-chimney-flue-liner/

You will not add Vermiculite until the stove is fitted and the register plate (also called a closure plate) above the stove is fitted (otherwise it will just pour out of the chimney and into the room). So you need to check out the stove-fit sections and come back here afterwards. Best to read it now to get an idea of what is to come later.

You will be in the position as seen in the picture on the left (unless pouring Vermiculite PRIOR to the pot going on and then you will find it even easier – just fill that chimney up). 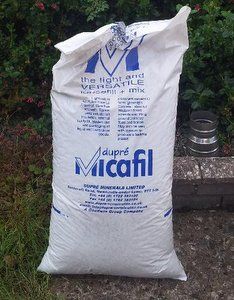 Vermiculite (Micafil, pictured, is a brand name) is supplied in bags. It resembles a muesli breakfast cereal. It is very light and will be taken by the wind easily.

Vermiculite cannot catch fire and is used to insulate around chimney liners. It is poured into the top of the chimney and will cascade down the chimney onto the register plate, filling the gap between the liner and the chimney itself all the way to the top.

Vermiculite is only suitable for chimneys with a few inches of air gap. If your liner has more than a few inches of air gap you are going to use a heck of a lot of Vermiculite. To be safe allow 1 bag for each metre of chimney you need to fill. If you really hate the idea of having any left over you can budget for 0.8 bags per metre and hope you do not run short. 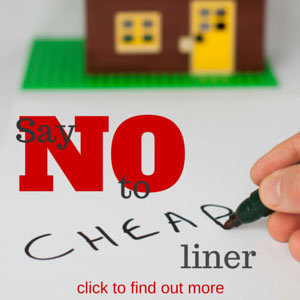 The simplest method of filling is to obtain one of those “Gorilla buckets” as favoured by builder’s or horsey folks. Cut a hole in the bottom just slightly smaller than the hole at the top of your pot then slip it over the bit of liner sticking out of your chimney pot. Tape it to the pot using Gaffer tape or similar. Passers by love to shout comments at this stage but just ignore them. If the protrusion of liner is “inside the bucket” then stuff a rag in the end to stop Vermiculite going down the liner.

Pour Vermiculite into your new “funnel” (the bucket”) and keep doing so until your chimney is full.

You want to end up with a picture that looks like so:

Note that this method of attaching liner to pot is not to be used if your liner is wrapped (rather than Vermiculite).

You will need to cut the liner just above the top of the pot (1-2cm) using an angle-grinder, hacksaw or tin snips. I like this 1 cm as it allows the sand cement mix to overlap onto the top of the pot, this all asisting its grip on the pot itself.

A 3:1 sand cement mix will do here. The Vermiculite will provide a base for the mix (you will of course have to extract some Vermiculite (wriggling the liner will “settle” the mix and this also works).

Should you wish, for any reason, to secure your liner at the top but are not adding Vermiculite you need to prevent the mortar just falling into the chimney. I push rolled up chicken wire into the gap between the liner and the pot – making sure it is about 6″ down into the pot. This prevents the mortar (as long as it is not too thin) from passing this man-made barrier. Essentially the chicken wire is rolled just a bit too big and it compresses when you push it in around the liner (so the chicken wire does not fall down the chimney).

With your mortar set hard you can now fit any chimney cowl (with the hanging cowl the snout will just slip inside the liner)..

Are you off to fit a chimney liner now?