The signs of Carbon Monoxide poisoning

In my earlier years of stove fitting I fitted a few stoves connected “direct to brick/stone chimney” (i.e. no chimney liner), some under Building Control approval (inspected by the local Building Control officer). I used to pride myself on “saving the customer a few pounds”, after all “open fires have been pumping smoke in to chimneys for thousands of years”. So why worry today?

I knew that some stove fitters refused to fit stoves without stainless steel chimney liners. A bit silly I thought. Why waste money when one has a perfectly okay-looking chimney?

It wasn’t long though before I had a complete change of heart. Two incidents brought me to this conclusion: an install of my own that concerned me and a story told to me by a person who investigates solid fuel “incidents”.

Some terminology: If a chimney is a polo mint then the flue is the hole.

Some excellent documents by the British Chimney Manufacturer’s

Association on this page (really worth a look as easy to read with lots of diagrams) here. 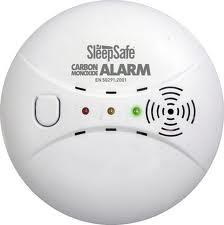 I fitted a wood burning stove in a downstairs living room. The owners were not well off and I gave them the option of liner or no liner. They were happy to go with no liner and so I fully tested the chimney using a full sealed chimney “Smoke Test 1” (as outlined below). The chimney passed.

I fitted the stove (with a metal register plate as required) and the install was fully certified and signed off.

A year later I received a phone call: the child was ill in hospital and the mother and father could smell smoke in the child’s bedroom.

Well you can imagine how my mind raced. I was at that house fairly sharpish and speaking with the mother and father. It turns out that the child was in hospital for a reason nothing to do with the smell of smoke but of course the parents were concerned.

When I entered the bedroom it was fairly obvious what had happened: the wall paper on the chimney breast had been removed (for decorating whilst child in hospital) and there were a number of large cracks in the plaster. A “Smoke Test 1” proved that smoke could be made to exit the cracks. I was horrified. It was only the wallpaper that was preventing smoke entering the child’s room and there was no way I could have known.

I fitted a liner to this chimney straight away (at free labour cost in this case with the customer just paying for materials).

I met one of the inspectors who is called to “crime scenes” involving carbon monoxide. He told me a whole host of stories, some horrific, some funny, some strange.

Before I put you off ever buying a solid fuel stove let me say this: after listening to a multitude of his stories he informed us that a chimney liner and CO detector would have prevented every single solid fuel Carbon Monoxide death he had ever investigated. Solid fuel stoves are very safe when fitted correctly (same goes for gas/oil etc.).

So to the upsetting tale goes something like this… 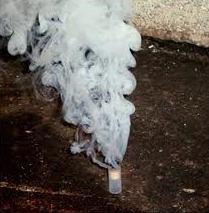 An installer performs a basic smoke test that involves lighting a smoke pellet in the old fireplace and checking that the smoke exits the pot – it does. He installs a stove and connects it directly to that chimney. He smoke tests the stove in the same manner and smoke exits the pot. He leaves.

Customer is happy and uses the stove quite happily for a period of time.

Late one evening the customer lights the stove as usual. What he doesn’t know is that Jackdaws have built a nest in his chimney (installer did not fit a bird-proof cowl). Now usually the customer would find out something was wrong fairly sharpish as it would be difficult to light and smoke would billow out of the stove via the stove’s air vents (or billow from the stove door should he open it to investigate). But in this case the fire lit and burned quite normally with the householder unaware of the problem.

The smoke, unable to exit at the pot, found a hole in the bricks that separate two flues – in this case the bricks that separated our customer’s flue from next door’s flue. The smoke poured into next door’s chimney and travelled up to the top. Next door did not use their chimney and had blocked off the top to prevent rain getting in. But what they had also done, quite reasonably, was to add an air vent, in their upstairs bedroom, to help air the chimney to prevent damp.

Smoke exited the air vent and Carbon Monoxide killed both neighbours whilst they slept in their beds.

The dangerous gap between the chimneys would have been detected with a full “Smoke Test 1”. Fitting a chimney liner and cowl with a bird guard would have prevented the incident.

The two stories combined made me think very hard about whether one should ever NOT line a chimney. Nowadays I usually only do not line a chimney if the flue is concrete-lined or pot lined. Even in these two circumstances I will often line a chimney anyway as long as the flue diameter will accept a liner.

The risks are vastly reduced if the property is a bungalow or if there is a vaulted ceiling as there is a CO detector in the only habitable room and there are less hidden areas where smoke can sneak out unnoticed. However these properties are easier and cheaper when it comes to chimney lining with 6m of quality liner costing £150-ish and it is likely that lining such a property is logistically simple.